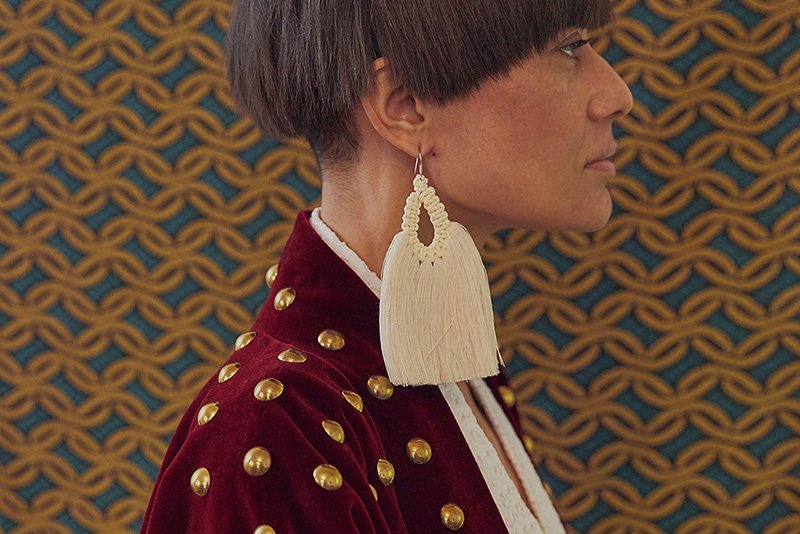 Some wonder who is behind AFFAIRES ÉTRANGÈRES, others may not. Here is finally the opportunity to put a name on this label. Sitting cross-legged, sure of himself, it is with sincerity and assurance that Eddy Camara Merzoug gives himself and gives us his vision of fashion.

“Who is Eddy Camara Merzoug?

I was born in Lyon to a Guinean father and an Algerian mother. My origins make me feel like the result of miscegenation. I did my schooling in Lyon until A levels. Then I went to Strasbourg to do my secondary studies. When I started working at Zara, I was an architecture student.

It was very fast. I did a part-time year as a student, then I was offered to help the store manager who went to Nice, from there I went to Nice and never came back.

Why the name ” AFFAIRES ÉTRANGÈRES “?

AFFAIRES ÉTRANGÈRES for two reasons. AFFAIRES (Business) because it evokes clothing and other aspects such as small design, deco and art.
ÉTRANGÈRES (Foreign) because they are pieces, clothes, pieces of art that have nothing to do with each other, a priori. However, I find that there is a great subjectivity within AFFAIRES ÉTRANGÈRES because I select pieces that have a common thread, even if they are different, there is a state of mind, a particular taste for the mixing and the association of very different things.

What made you want to embark on this ambitious project?

First, it’s Kuwait. Working at Zara, we are in a certain standardization of the fashion supply anyway. We push people to dress the same way. In Kuwait, women had a certain ability to play uniformity. That is to say, they could wear Zara but, either in a customized way, or associated with other more local creations. And I said to myself, “if we offered them creators who have a singular history and an identity of their own, I think it might please them”.

In 2010, the idea of bringing together creators started. And it is at the very end of 2015 that I started more seriously working on this project.

Is there a message to pass behind your label?

That beauty is everywhere and that every culture can dazzle us. Our fashion position here is inspired by it. In fashion, I think there are two things, which follows the trends for us to consume and the other mode, which I call fashion beyond the modes; it is this ability to ignore time and to know how to harmonize pieces that we love and know how to adapt them to a rather contemporary, westernized wardrobe, while keeping its own identity. To know how to appreciate what the other knows how to do. All cultures are able to produce beautiful things, it is enough to know how to look at them. I believe that clothing can be a real vector of exchange and cultural sharing.

What are your ambitions for the future?

I would like AFFAIRES ÉTRANGÈRES to become a kind of prescriber. That we come to buy clothes, jewels and other forms of art and at the same time also, come to find ideas and why not after having physical places. Not many because the idea is not to have rehearsals, but one or two physical places in which people draw ideas and come to discover talents.

How do you choose your creators?

It’s very subjective because it works at the stroke of heart. The pieces I see, I imagine them very quickly, how can we marry them, switch them, how we can get them out of the image we gave them. I use a lot of Internet, salons and small pop-up stores.

You have travelled a lot, what was your culture, your favourite country apart from Kuwait?

It’s hard to say that we have a favourite culture because it means that there is a hierarchy in cultures and I think it’s very dangerous nowadays to say that. So, I would not say favourite culture, but the cultures that impacted me. Morocco, Israel, Kuwait, Lebanon and diametrically opposite, Iceland. We are in countries where we live so differently and at the same time, how to wear the garment, what it means in these countries is sometimes similar but at the same time so different. There is no hierarchy of culture but there are different cultures that have a phenomenal richness. Paris remains the meeting point of all that.

What do you think of fashion today?

Trends is something that annoys me, because it’s only for consumption. I think there is only one fashion, fashion is more the way to dress and combine clothing. I think it can be unique to everyone. It must be adapted to its environment. There is not a fashion but simply a pleasure to associate clothes and to marry them. Someone that I will admire because he masters the fashion, it is someone who dresses in a singular, comfortable way and who will play the borders without it being a disguise.

Which brand on AFFAIRES ÉTRANGÈRES is closest to your style?

I could quote them all, because when I choose them, I immediately imagine how I would wear them, to divert them, to associate them with other pieces. It occurs as an excitement, to consider all the possibilities that offer me these creations. By barely exaggerating, I would say that I feel the “Tarab” (intense emotion aroused by a music, a song, dance).

How would you define your style in 3 words? And your label?