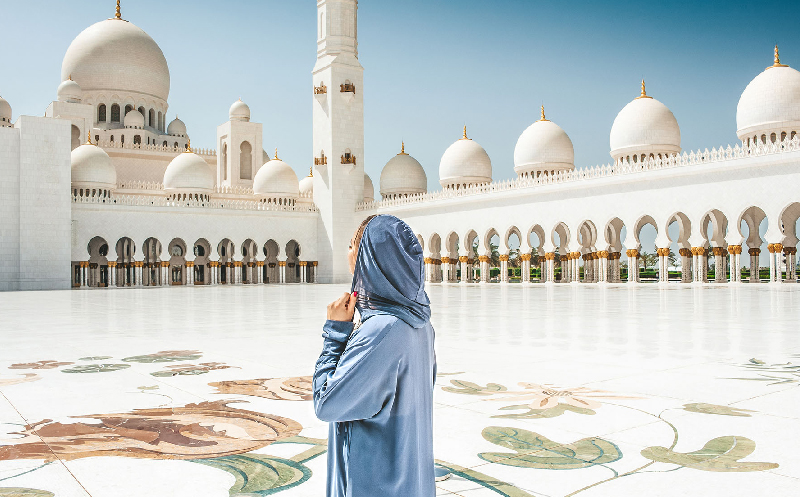 Women in the Gulf States

Who has never heard of Dubai’s beaches becoming a favorite destination for tourists and celebrities? Or even the multiplication of exchanges between the Gulf countries and Europe concerning sport or culture? It must be said that this region of the world has no longer gone unnoticed over the last ten years. However, in this context, women in the Gulf remain an enigma for many Westerners. Privileged customers of Parisian luxury boutiques, they intrigue and question. In them there is a kind of paradox between openness to Western modernity and the preservation of local traditions. This paradox tends to be embodied with elegance in their clothing choices.

Real inspiration for the AÉ label, we have decided to present you the style, according to the women of the Gulf.

A style faithful to the perpetuation of traditions

Abaya, caftan or djellaba … These oriental outfits all have in common that they are ample, so as not to mark the feminine silhouette. This fashion even has a name: modest fashion. In the Gulf countries, modest fashion is embodied above all in the abaya. This is a traditional Bedouin habit that is worn over others to cover the whole body except the face, feet and hands. Similar to a “tracksuit”, the abaya is often combined with a veil covering the hair or the whole face (the niqab).

Originally, this long tunic with the allure of a coat was reserved for the elite women. It was later imposed in a religious context, especially in Saudi Arabia.The other Gulf countries, such as Qatar and the United Arab Emirates, give their women citizens a margin of freedom. But despite this freedom, many women still wear the abaya. The abaya is seen as an indirect symbol of respectability and social status. Its wearing is therefore often encouraged or even imposed on families in the Gulf.

But keeping the abaya is also a choice for many women in the region. For the Saudi designer Nour Al-Tamimi, for example, wearing the abaya is a pleasure. She declared to The National News magazine : “It’s special to be different from the rest of the world. I think the abaya is a beautiful garment that perpetuates a culture, a much like India with the Sari.” As for the Saudi designer Arwa Al Banawi, she does not hesitate to affirm : “The abaya is to us what the kimono is to Japan”. In other words, it is the symbolic embodiment of a culture in clothing.

Finally, the wearing of the abaya is part of the perpetuation of the local tradition. However, this tradition is more and more open to modernity. Indeed, step by step, the abaya is being transformed thanks to inspirations coming from elsewhere.

The wonderful mix of tradition and modernity in Gulf fashion

If some people perceive the abaya as an obstacle to women’s freedom, this should not be misunderstood : the women from the Gulf cultivate a highly sought-after look ! Familiar with the fashion market of this region, the founder of the AÉ label noticed : “What seems like a constraint, they turn it into extremely fashionable clothing. » It is true that the outfits hidden by the abaya hold many surprises : the women from the region do not hesitate to dress up with the latest pieces of haute couture houses. Some of them even give a hint of these outfits, while keeping their abaya open.They then complete their look with a bag and a pair of heels from some of the biggest names in fashion. There you go! The woman from the Gulf is ready to go out to work or shopping.

In addition, the abaya is now increasingly being revisited by local designers. It is now available in different shapes, materials and colors. You only have to look at the creations of the Qatari designer Ghada Alsubaey to realize this evolution : from black abaya to bohemian, elegant and colorful creations.

Gulf fashion is thus becoming a fashion in its own right that inspires both locally and internationally. Speaking to the Emirati magazine The National News, the famous Saudi designer Hatem Alakeel declared : “It’s no longer called an abaya, call it a fashion outfit. It’s a very royal and glamorous fashion outfit and a lot of designers are inspired by it.”

Revisiting the abaya in a glamorous style is also the speciality of Sheikha Mozah Bint Nasser, mother of the Emir of Qatar. A symbol of elegance, taste and modesty, its style perfectly illustrates the combination of the perpetuation of local traditions and openness to Western modernity.

This meeting between modernity and tradition has inspired great names in Western fashion. More and more brands are choosing to invest the Gulf market in a process of glocalization. This term describes the adaptation of internationally distributed products to the consumer requirements of a local market. This is the case of the Italian luxury house Dolce & Gabbana, which has been presenting the Abaya collection since 2016. The brand celebrates “modest fashion” in a collection rich in prints, colors and accessories. There we find caftans or oversized two-piece suits, decorated with lace or flowers. Originality and haute couture meets in this way to satisfy an extremely flourishing fashion market!

When inspirations meet… on the AÉ label

Some of the designers present on our website also draw their inspiration from the cuts and colors of the Orient. This is the case, for example, of the Tremblepierre house, which has made the kimono one of its main sources of inspiration. For the Tunisian Anissa Aida, inspiration is drawn from traditional Japanese and North African outfits. The result is at the crossroads between modernity and timelessness.

But if creators are inspired by Orient, it is highly probable that a woman from the Gulf could be inspired by them ! More and more of them are trying to get around the abaya while maintaining a degree of modesty. They therefore open up to pieces that are at the same time large and highly worked. Good news for
women: buying stylish, loose-fitting clothes has become much easier in the last few years. They can be seen on the catwalks, in the ready-to-wear brand collections and… on the AÉ label catalogue !

Indeed, while browsing through the AFFAIRES ÉTRANGÈRES Paris website, a woman from the Gulf could fall in love with the Blue Kimono jacket from Cocagne and marry it to a pair of trousers or a skirt. She could also set her sights on Tremblepierre’s creations. The IRIDE Kimono jacket could be chosen to match the Palazzo wool and cashmere trousers. The entire outfit would be completed with a scarf or a turban, carefully selected… Why not also choose silk scarves from Bresma? 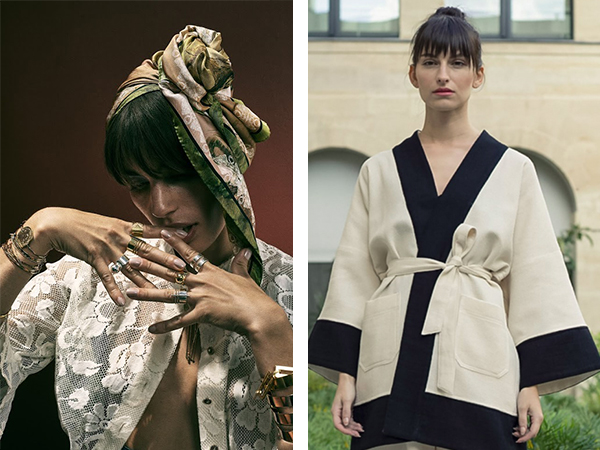 In short, the traditions of the Gulf countries are being perpetuated with modern rehabilitation. In contrast, Western modernity draws on these traditions to offer timeless pieces. It is precisely this meeting between women from here and elsewhere that the AÉ label seeks to defend. In fact, it is enough to go beyond the clichés to discover the richness of beauties from elsewhere.